This weekend there will be a flurry of activity on the Island Railway as the ICF has brought over a very special train for the weekend, check it out:

This is ostensibly to start the celebrations around the 130th Anniversary of the E&N Railway this year.

There will be 4 runs of the train on Friday April 9th at Noon, 2PM, 4PM and 7PM.  The first run will be special for AVICC delegates and dignitaries.  The other three runs are open to the public with tickets being sold through various charities and community groups. They all sold out very quickly of course!

In my role as City Councillor for the City of Port Alberni, I have crafted a resolution to bring to the AVICC conference that I will be presenting and arguing for on Saturday morning.

It is below in full.  If you support this resolution, please let your local government official know so that they can support it during the AVICC conference.

It’s going to be a great weekend!

ISLAND CORRIDOR FOUNDATION FEDERAL FUNDING
WHEREAS the Esquimalt & Nanaimo (E&N) Railway corridor remains a critical transportation asset for the current and future needs of the people and economy of Vancouver Island;

AND WHEREAS the Association of Vancouver Island and Coastal Communities (AVICC) passed a resolution urging action in 2012 and further delay in repairs to the corridor jeopardizes its viability;

THEREFORE BE IT RESOLVED that the AVICC petition the Government of Canada to approve and release the $7.5 million for capital works on the Victoria to Courtenay rail line in order for work to begin as soon as possible and ensure the future of rail based freight and passenger transportation between Victoria, Courtenay and Port Alberni.

The Esquimalt and Nanaimo (E&N) Railway corridor was built in the late 1800s and extends from Victoria to Courtenay and inland from Parksville to Port Alberni. The railway was acquired by the Island Corridor Foundation (ICF) after Canadian Pacific and Rail America donated their portions of the line to the ICF in 2006.

Since its inception, the ICF has been pursuing the revival of rail service on Vancouver Island. Passenger service had been suspended because of safety concerns due to poor track conditions along the rail line however, rail freight continues to operate between Nanaimo and south Duncan.

In 2012 the federal and provincial governments jointly committed approximately $15 million to the restoration of the rail line with the intention of making the corridor safe again for passenger service. This included a $500,000 bridge engineering study supported by the provincial government.

With the total project estimated at approximately $20.4 million, ICF secured the remaining funding through agreements with Island regional districts, Via Rail, Southern Railway of Vancouver Island (SVI), and ICF’s own source funds.

In July of 2015 the province affirmed their commitment to provide $7.5 million to the ICF for the project. However, the transfer of funds is contingent on confirmation that the $7.5 million in federal funding is in place and, through a tendering process, that the upgrade work can be completed within the $20.4 million budget.

With the change in government following the October 2015 federal election, the Island Corridor Foundation is now seeking an affirmation of the previous federal commitment for $7.5 million in order to develop and issue a tender for the necessary upgrades required on the rail line.

This resolution seeks to ensure the future of rail based freight and passenger transportation between Victoria, Courtenay and Port Alberni by petitioning the federal government to release the committed funding for the project.

It has been a roller coaster ride over the past few days.

We had the big high of the announcement followed by a low when VIA categorically denied that any agreement had been signed. Newspaper articles were flying left, right and centre.

Yours truly even decided to phone and email Jaques Gagnon of VIA Rail on Thursday to ask what was up. Here is that email with his answers as he wrote them:

Has a tentative agreement been reached with Southern Railway as was announced by the ICF yesterday? There is no formal agreement reached between VIA Rail Canada and SVI/ICF

Did VIA email the ICF and SVI permission to hold the press conference yesterday and use the term tentative agreement as co-Chair Judith Sayers has indicated in public interviews? No

Will the tentative agreement be submitted to the VIA Rail board for ratification and if so when? Hypothetical

Are there details you can share about the tentative agreement that the ICF has not already shared? No

Throughout this drama Mr. Gagnon has been leaning heavily on the difference in the words “tentative” and “formal”. I emailed him a followup to the question above noting that I had not asked if there was a formal agreement, but rather if there was a tentative one like the ICF announcement. I have received no response.

The intransigence seemed to start to break down in an interview with the Times Colonist though.

Asked about the foundation’s description of a “tentative deal,” Gagnon said: “I would leave it to them to describe what is a tentative agreement or an agreement in principle. We all know that, in business, a contract is valid from the moment both parties sign and we’re not there.”

So he has consistently refused to confirm if any tentative agreement (which are very common in all negotiations) had been reached insisting instead that no deal existed or seemed to be worth talking about until the “contract” was “valid” and signed.

This intransigence seemed to spark some annoyance from Nanaimo-Alberni MP James Lunney who was quoted Thursday in the Parksville Qualicum Beach newspaper:

“It is disappointing that VIA didn’t stand with the ICF at this time,” said Lunney. “I have assurance from both ends that there is a tentative agreement. The agreement is there.”

Lunney would not speculate on when any official announcement would come, but he said “there’s no excuses for delaying anymore.”

And perhaps that is what sealed it because again on Thursday Alberni radio station 93.3 The Peak interviewed the other spokesperson for VIA, Mylène Bélanger.

Her telephone quote broadcast on the radio:

There is a tentative agreement on the table that must be signed.

There was that really so hard?

Well, today I had the pleasure to attend the Island Corridor Foundation’s official announcement of an agreement between Southern Railway of Vancouver Island and VIA Rail that would bring passenger service back to the Island, and release the funds to repair the track and bridges for both freight and passenger trains.

UPDATE: This afternoon media sources have contacted VIA for their reaction and VIA spokesman Jaques Gagnon has said that no deal has been “signed, sealed, and delivered”. I just listened to CBC Radio On The Island interview ICF co-chair Judith Sayers who said that, Gagnon is technically correct but that the ICF received approval from VIA to use the term “tentative” agreement at today’s press conference. So in effect they are both correct. Technicalities aside, Sayers said the agreement will be ratified by the three parties and things will move forward.

VIA says no agreement until it is signed-which is true- but agree in e mail to ICF a tentative deal has been reachedhttp://t.co/c4uDlmJ9mS

Co-Chair Mary Ashley said the agreement was tentative pending its ratification by the Boards of the ICF, SVI and VIA. The ICF annual general meeting is April 17th so one would hope it is ratified there.

The new service schedule was not released but Ashley indicated the trains would now be based out of Nanaimo and so there would be a run from Nanaimo to Victoria in the morning, followed by the traditional run to Courtenay and back to Victoria, then finally a run to Nanaimo in evening.

Work on the track and bridge repairs needed to get things rolling would take approximately 9 months to complete once the agreements are signed, funds released from government, and work tendered.

On the freight side this work will mean the freight service can resume normal speeds on the entire line from Victoria to Courtenay with only a few exceptions. I chatted with an SVI employee who seemed genuinely grateful that this agreement had been reached and indeed the employees and personnel at SVI were applauded for hanging in there and getting a deal done with VIA as well. 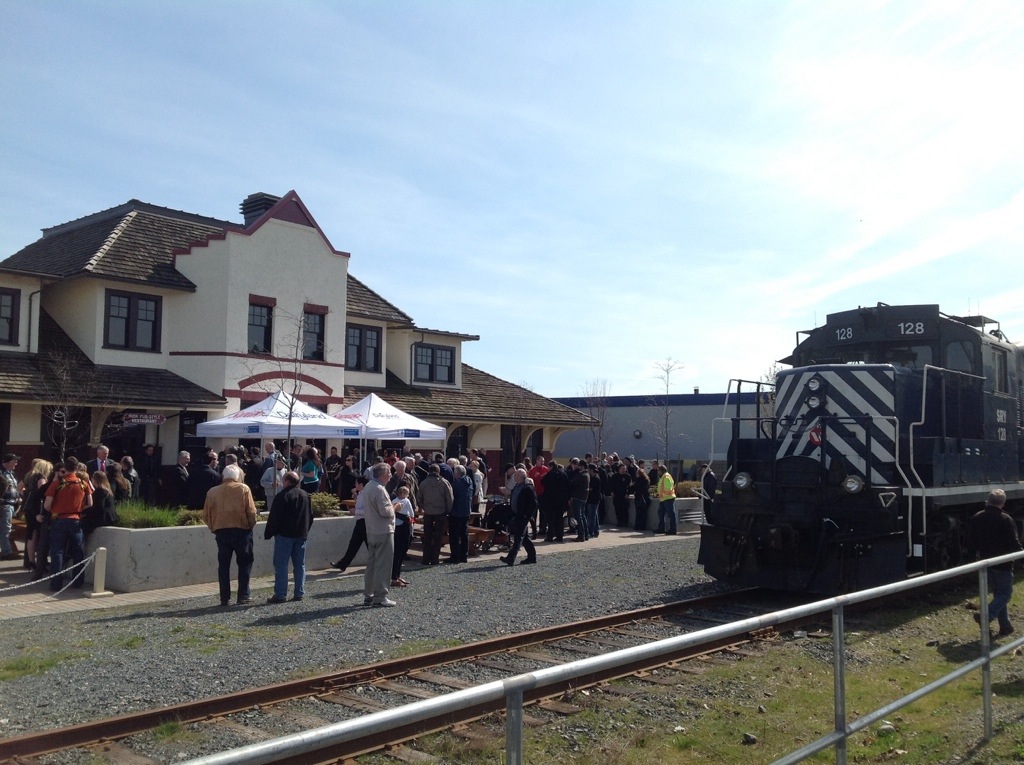 This also means SVI will be able to pursue new and previous business that the railway served. The next step will be further upgrades to the bridges (and possible replacement as per recommendations in the BC Gov report) and then looking at refurbishing and reopening the Alberni sub to Port Alberni.

If all goes well I would hope we see full service resume on the Victoria-Courtenay tracks by Summer or early Fall 2015. It has been a long time coming but it seems like we are finally getting there.

This news also means perhaps a different reception from the RDN when they are presented with the Central Island Intercity Transit Service at an upcoming Board meeting (date TBD).

This is a great day for efficient and green transportation on Vancouver Island, Island jobs, and Island communities.

Here are some reports from other media outlets:
Comox Valley Record